The pomp and show of food is a relatively new phenomenon. At some point, and we’re hard-pressed to pinpoint exactly where, but with leaps in molecular gastronomy, in food technology and innovation, simple seasonality seemed to lose its way.

“I believe in seasonality”, Chef Baron told us, establishing at the get-go that his establishment hinges around this idea. “Right now everything is perennial and it’s not meant to be. We’re often compromising on the taste of our produce.” Baron is the owner and the lone chef at The Farmer’s Wheelbarrow, an alfresco restaurant in the capital hidden in the back-alleys of Sainik Farms, the former-Defence colony that is now better known for its large plots of land, and where Chef Baron is bringing the focus back to simple and circular dining.

When you visit, expect a bit of a meander through a grid of lanes (those who know Sainik Farms know this grid), and you will eventually find yourself in a spot that feels more like the countryside than the capital. It is rustic, pared-back, and will likely seem bare to some, but this is deliberate, Baron’s decision, “leaving behind the commercial aspect of things.” Seating is outdoors, on wooden furniture that melds with the lush and unmanicured ecology that surrounds it. Baron’s kitchen garden supplements the dishes on his ever-changing menu. “What I can’t grow here, I buy from the smallholder farmer who sells off his raedi”, he explained. His disdain for uniformity is evident all around; you’ll find bare tables and benches at angles to fit between the trees and produce that’s irregular just how nature intended it.

In between courses Baron talked to us about his homespun venture his surprisingly storied history.

Tell us about yourself.
My name is Sambaran, but my friends just call me Baron. I studied Nautical Science in the United Kingdom (before working in the Merchant Navy for fourteen years), and that’s when I started taking up various food-related jobs, from being a wine waiter at a cocktail bar and working in a banquet kitchen to toiling in a 24/7 coffee shop kitchen and learning about the nuances of fine dining.

That’s a really varied lot of experience.
I wanted a holistic knowledge of food, and so I’d take up whatever I possibly could. I even went through butcheries, fisheries, and slaughterhouses. Experiences like these helped me learn about cuts and how to value the animal from nose to tail. In butcheries, meat is usually received in quarters, but I wanted to work with whole carcasses as well which is why the slaughterhouse.

It’s during my time in the Merchant Navy that I really got involved with food (more eating than cooking, mind you), learnt about the origin of ingredients, what pairings work (and what don’t), and that’s when the switch happened from food being an area of interest to it becoming a fascination. I’d obsessively ask people where they got what from, and bring things home to cook with.

Was this interest in food rooted in your childhood?
I grew up in Calcutta until the age of 18 but I’ve been out ever since. I come from a Bengali household and we were blessed with many good cooks at home, and my grandmother played a large role in my passion for food. My earliest memory is sitting on the kitchen slab and watching the inside of her pan. Lots of recipes have been passed down by her. While I was gaining experience in cooking and learning different techniques, I realised that we used to use those really complicated techniques at home, which we grew up seeing first hand; techniques that now form the crux of fine dining.

Do you have a food philosophy, would you say?
I don’t like restricting myself; you can have elements from various parts of the world on one plate. There’s so much to learn from all the different genres of cooking, which I have been very blessed to experience during my time at sea, which is also when I got to see how the locals eat. I’m a very impatient person, so food it something that is very fast moving, and shows quick returns. I also believe in seasonality, because right now everything is perennial and it’s not meant to be, so we’re often compromising on the taste of everything. We’re looking at tomatoes that are uniformly red, watermelons without seeds, and other absurdities; how much do you want to manipulate nature?

Tell us about The Farmer’s Wheelbarrow.
I was looking to start a charcuterie and a smokehouse (smoking in a traditional grill like the one I have here and not in an electric grill). That was basically the idea, and I was looking for a place when I chanced upon a friend’s mother’s farm that she was willing to let out. I wanted to be away from the commercial aspect of things, a vibe of leaving the world behind and coming here. I try and keep this place as niche as possible, interacting with each and every guest before, during and after their meals, and cooking everything by myself. I have my posse, but I do the cooking myself.

I often center dishes around my favourite ingredients, like mangos for example. Not too long back, we were doing a mango chilli ice-cream. Plus, some of the food I serve goes well with a glass of wine, so while I don’t encourage guests to come and binge, they are most welcome to bring their own alcohol and enjoy a drink or two.

Have you always grown your own food?
My parents were avid terrace gardeners so we had the odd tomato tree, chillies, lemon, kumquat. The house I grew up in had pumpkins growing atop the garage, something our household help had planted at the time. So the concept is definitely not new to me.

Tell us about the menu
We’re up and running with a short but sweet al la carte menu. Three set menus each of a five course meal. There will be a lot of steaks and pastas, and ever-changing desserts. Until now I’ve had a fixed five course meal menu, but that’s all changing as the weather turns.

Drop Chef Baron a message at +918588074566 to book a table for a winter lunch or dinner.
He’ll gladly sort you out with any queries you have. 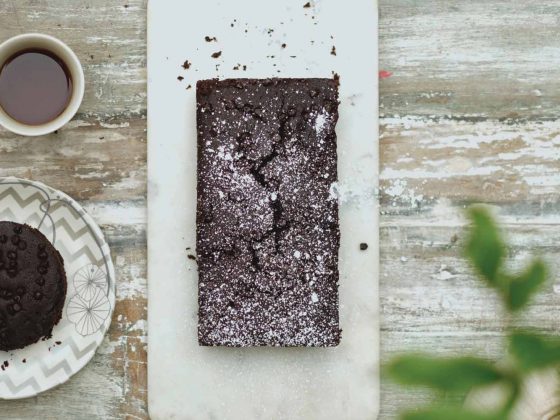 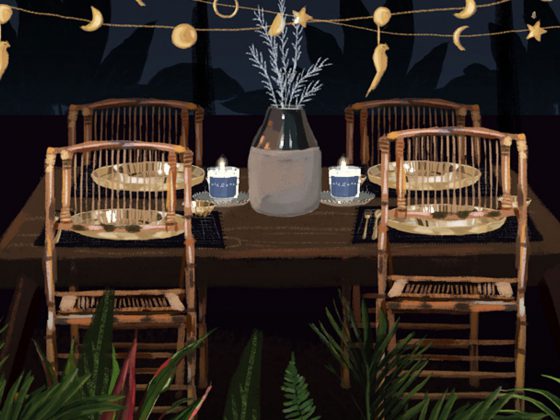 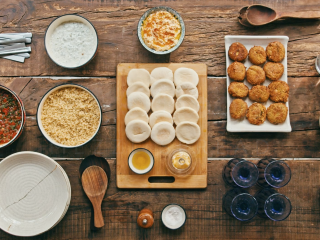 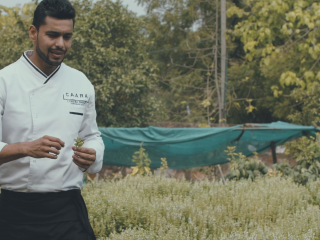 First, eat with your eyes 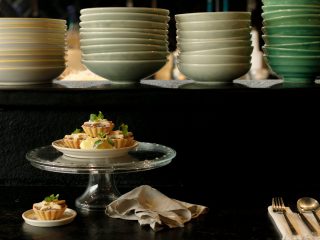 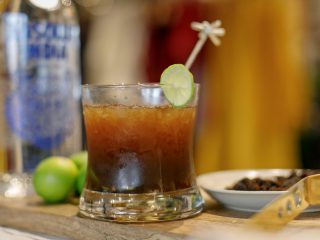 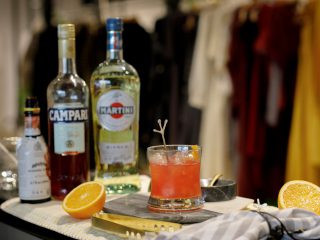 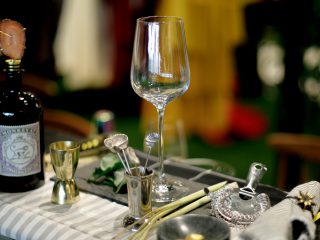 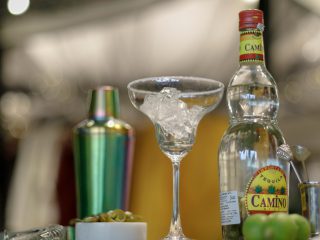